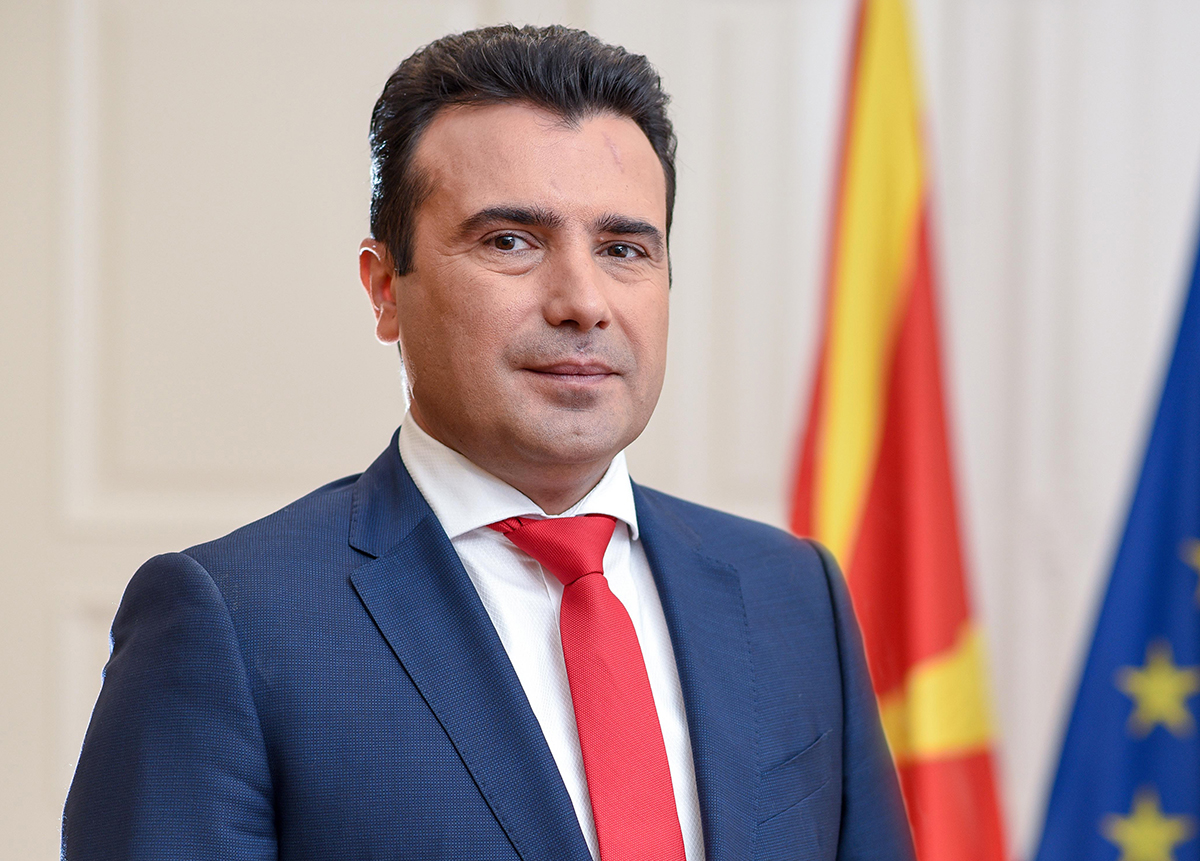 The President of the Government of the Republic of North Macedonia, Zoran Zaev was born on October 8, 1974 in Strumica.

He grew up in a modest, agrarian household, brought up by a traditional family. Starting from early age, his younger brother and he were involved in the agricultural family business, which served as the only source of income. Zaev and his brother were raised by their parents and grandparents to be hardworking people who never procrastinate and believe there is a solution to every problem.

Later on in his life, he met his wife Zorica Zaeva with whom he has two children, Aleksandra and Dusko.
Zoran Zaev was a high school student when Macedonia became independent in 1991. He had already demonstrated affinities for math and was surrounded by family members who were thriving businessmen, active and respected in the socio-political and economic sphere of the Macedonian society. In 1997, Zaev graduated from the Faculty of Economics within Skopje University "St. Cyril and Methodius" where he continued his education on postgraduate studies of Monetary Economics and Finance.

Inspired by the business success of his uncle, he immediately started working in a family-owned trading company - "Trgoprodukt", where he progressed to the managerial position in 5 years. Additionally, he was a member of several boards of companies, banks, and public enterprises.

Zoran Zaev has been a party member of the Social Democratic Union of Macedonia (SDSM) since 1996, while in the period 2003 – 2005 he was a Member of Parliament in the Assembly of the Republic of Macedonia.

In 2005, Zaev became a mayor of the City of Strumica, as the youngest mayor in the country. Under his leadership the city had developed economically and became the city with best credit rating.

The city, and Zoran Zaev, as its mayor, while in office, won several awards and recognitions. On two occasions, in 2008 and 2009 the city won the highest national award in the field of environment, while Zaev, as mayor won the Best Practice Award from the Council of Europe for the first Public-Private Partnership in the country, implemented in the construction of the object "Global" in Strumica.

After winning the local elections in 2013, he began his third consecutive term as mayor of this city, executing this function until December 2016.

Besides the evident success in the development of the city, Zoran Zaev became one of the most favourable politicians in Macedonia because of his openness and availability. He was the only mayor who put transparency into practice by monthly appearances on a local TV station, where he presented the work of the municipality, while listening and answering to all citizens’ issues and questions.

As the leader of the political opposition in the country, Zoran Zaev became the synonym of bravery and the frontrunner in the fight for justice, freedom, and democracy.

In February 2015, Zaev started the project "The Truth about Macedonia" by publishing the wiretapped material unveiling the criminal activities of the government led by Gruevski. The resistance towards the autocratic government continued with his and SDSM’s active role in the Freedom Camp, which was a protest movement enticed by The Citizens for Macedonia - informal coalition of political parties and civic organizations working jointly to restore democracy in the society and revitalize the public institutions in service of the citizens.

On May 17th 2015, this movement organized the historically biggest non-party and civic protest in Skopje with more than 100.000 citizens in front of the Government.

The announced abolition by President Ivanov of then high government representatives provoked the citizens of the country to the Colourful Revolution - a massive protest movement all over the country. The movement started in April 2016, was spread throughout the country and lasted 100 days.

Zoran Zaev created and promoted the concept of "One society for all", as a mosaic of shared living of various cultures and communities in the country, announcing, thus, the future development of North Macedonia as place for life of all citizens, regardless of ethnic, political or other determination. This unifying concept has been the driving force behind the victory of SDSM at parliamentary elections in 2016, for the convincing victory on the local elections in 2017 as well as for the win of Stevo Pendarovski at the presidential elections in 2019.

After the "Przino agreement" and the parliamentary elections in 2016, followed by a difficult period of political turmoil, including the violent incident in the Parliament, on May 31, 2017, Zoran Zaev was elected Prime Minister of the Republic of Macedonia and got the mandate from the citizens to lead the new reform-oriented government.

At the end of the second year of the term of Zaev’s Government, the European Commission published the historically most positive report on the country’s progress. The Report notes the deep reforms conducted in the country using political dialogue and cooperation with all political parties in the parliament, especially with the opposition.

Prime Minister Zaev in the beginning of his term started leading the country towards the Euro-Atlantic integration focusing on good-neighbourly politics and restoring the trust of our strategic partners from the EU and the USA.

As a result of these intensive activities in August 2017 the Agreement for Strategic Partnership, Friendship and Good-Neighbourliness was signed with the Republic of Bulgaria, while in June, 2019 in Prespa, the historic agreement with Republic of Greece was signed, for resolution of the name issue of our country and for establishment of friendship and cooperation.

With the solutions stipulated in the Prespa Agreement, our country accepted the name Republic of North Macedonia while Greece recognized that the citizens of our country have their full right to call themselves Macedonians who speak Macedonian language.

In July 2018 in NATO HQ in Brussels, Prime Minister Zaev was given the invitation for NATO membership i.e. for start of the accession process by ratification of the Accession Protocol in the Alliance which was to start immediately after adopting the constitutional changes and implementing the Prespa Agreement.

During Zaev’s mandate the country reached the historically lowest rate of unemployment in June 2019 – 17.8%, as well as the highest annual rate of foreign direct investments amounting to 624.5 million EUR in 2018.

During his two-years mandate, the President of the Government of the Republic of North Macedonia, in the country and abroad, had meetings with the most important and most influential world leaders while, together with Prime Minister Tsipras, they were commended and received highest recognitions such as the Ewald Fon Kleist award of the Munich Conference on Security and as well as the award “Emerging Europe” for best practices in promoting cooperation, unity, inclusion, diversity and positive thinking.

In 2019 Prime Minister Zaev, together with his colleague Tsipras were officially nominated for Nobel Peace Prize.