Program for reducing the air pollution in the Republic of Macedonia 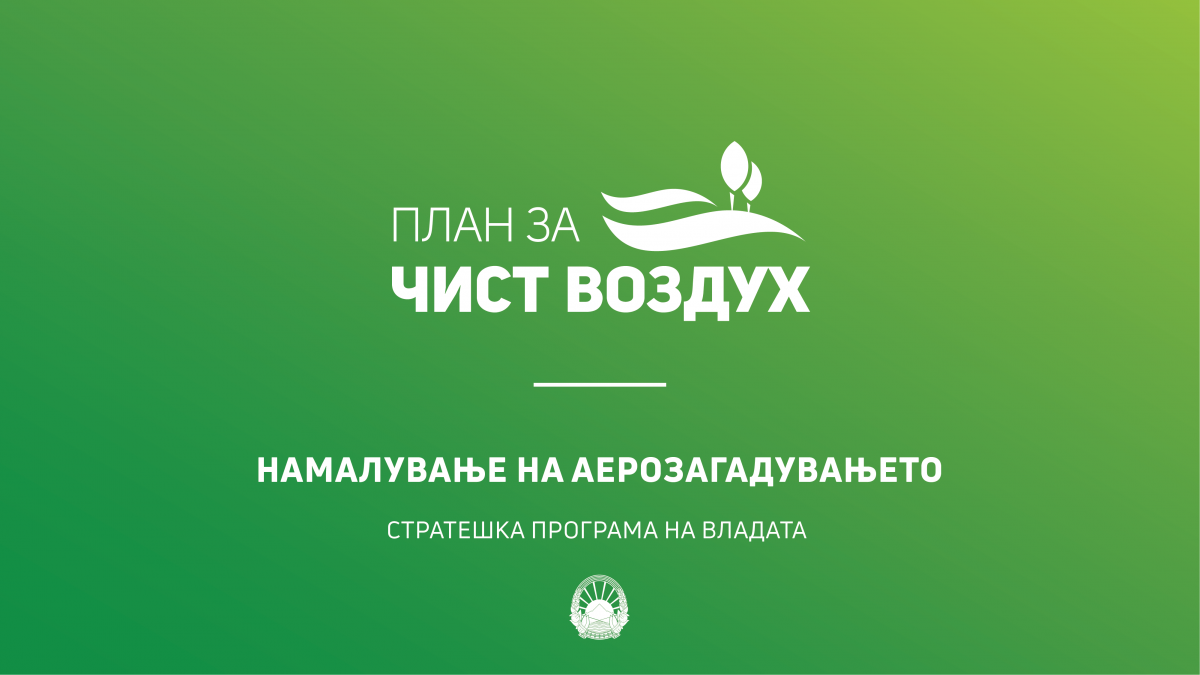 There are large quantities of pollutants present in the air in urban and industrial environments:

The emission of pollutants in the air comes from almost all economic and social human activities as are traffic, industry, combustion and power plants, households, construction activities, landfill sites (especially the lawless ones) for waste and agricultural activities. The combustion of biomass by households, i.e. burning of solid fuels such as wood and coal, is an important source of directly emitted solid particles and polycyclic aromatic hydrocarbons (PAHs), which fall into the class of carcinogens. Agriculture is the main responsible activity for the emission of ammonia (NH3), which affects both human health and ecosystems.

The Republic of Macedonia regularly monitors (albeit with many challenges and room for improvement) the air quality in Skopje and other major cities in the Republic of Macedonia, and produces the so-called inventories of pollutant emissions according to the EMEP/EEA guidelines (joint guideline of the European Air Quality Monitoring Program and the European Environment Agency) and transposed into the Rulebook on the inventory methodology and the determination of the level of emissions of polluting substances into the atmosphere in tons per year for all types of activities adopted in November 2007 (Official Gazette of the Republic of Macedonia No. 147/2007).

Aerial contamination is the biggest cause for premature mortality and the increased number of diseases in humans. It is the biggest environmental risk to the health of citizens in Europe, where, according to EEA and WHO data, it is the cause of about 400,000 prematurely lost lives.

The Republic of Macedonia, unfortunately, according to the latest report of the European Environment Agency for Air pollution in Europe, is ranked worst among all European countries, with the most polluted air in the cities. Skopje, Bitola, and Tetovo are among the 10 most polluted cities in Europe in 2017. According to the latest World Health Organization (WHO) analysis, air pollution is the main cause of over 1300 deaths per year, and the increased number of people with respiratory diseases. According to the World Bank's analysis, air pollution costs the state about 2.5% of the annual GDP for additional health care services or 300 million euros per year.

Due to a larger number of socio-economic factors, air pollution is increasing from year to year, the situation is deteriorating and it becomes alarming. Certain analyzes and modulation of the emissions of polluting substances for the household heating sector in Skopje valley indicate that pollution will increase by 30% by 2025 unless urgent systemic measures for emission reduction are undertaken. These figures will be even higher if emissions are added from other sectors, such as transport, whose share of pollution is increasing tremendously year by year.

The quality of the air in major cities has been significantly reduced. According to the annual Environmental Quality Report of the Ministry of Environment and Physical Planning (MEPP) for 2017, the average annual PM2.5 concentrations in 2015, for example, for the municipality of Centar, was 40,14 μg / m3, and for the municipality of Karpos 50,51 μg / m3, and the concentration of PM10 was 72,82 μg / m3 and 57,06 μg / m3, respectively. The problem of air pollution in cities in Macedonia is an old problem. Accordingly, citizens in cities located in valleys are constantly exposed to higher concentrations than permitted. All reports show that there is a sharp increase in concentrations during the heating season, three to four times more. Skopje and Tetovo, for example, have many days in the year that exceed the maximum average daily values for PM2.5 and PM10 particles.

The situation in other major cities is similar, but unfortunately, except for the measurements made at the measuring stations, there are no comprehensive and detailed studies, although there are indicative studies that indicate that the biggest polluters in these valleys are heating, waste, and industry.

Air pollution is a consequence of many factors, and in order to reduce it, it is necessary to reduce emissions of pollutants from all sources mentioned in the introduction.

The first step towards solving the pollution problem is determining the sources of pollution. For that purpose, the Ministry of Environment and Physical Planning, the City of Skopje and other relevant institutions in the past years have made a series of analyzes and studies to determine in which period of the year the highest concentrations of pollutants occur. According to these studies the peak (highest concentrations), when average monthly or daily concentrations are analyzed, occur during the winter period, i.e. during the heating season. This is illustrated in the next graph for PM2.5 particles.

All analyzes and findings carried out so far indicate that heating is the largest air pollutant in the Skopje valley. Such findings are confirmed in a study prepared by the Finnish Meteorological Institute within the twinning project with the MoEPP where it is estimated that around 90% of the total emissions of PM particles come from heating (firewood). 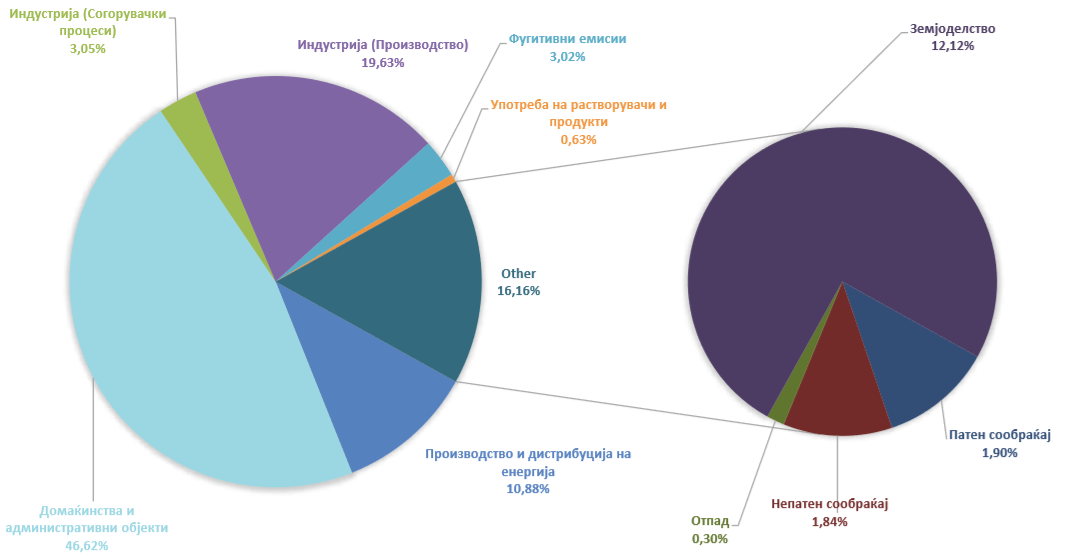 PM10 emissions in 2016 by sectors
(source: Environmental quality in the Republic of Macedonia - Annual report for 2017)

Although these studies show the concentrations of pollutants and indicate which are the sources that pollute the most, they are not sufficient for proper planning and realization of successful activities at the micro level, because they do not contain data on the causes of pollution. Having that in mind, in January 2017, the Ministry of Environment and Physical Planning in cooperation with the City of Skopje and UNDP conducted a survey on the heating methods of households, on a representative sample of 5044 households from the Skopje region (all 17 municipalities). The findings are analyzed and the results are presented in the report "Scientific-research study: How are the households in Skopje heated?” which together with all results of the research are presented in the documents available on the website www.skopjesezagreva.mk

Besides the heating, the other sources of pollution, from other sectors, shouldn’t be disregarded and underestimated. The waste and lawless landfills, as well as their ignition, then the industrial facilities, the construction expansion, and the failure to comply with the building rules, the numerous undisturbed surfaces from which dust is raised, and the traffic complement the complexity of the challenge and diversify the causes of the pollution which further make the process to deal with them even more difficult.

Main goals of the program

Hence, the conclusion is that only with a combination of measures aimed at changing the heating methods of households and all other sectors: construction, heating of small firms, transport, arrangement of public areas, together with strengthening the capacities of the inspection supervision and frequent controls in industrial capacities and other legal entities will give the best results to solve the problem.

Therefore, it is proposed to adopt a program to reduce air pollution, for which the systematic approach in reducing emissions from all identified sectors will be applied in strategically planned and deployed measures, which will aim to:

With this program for reducing the air pollution in the period between 2019 and 2020, the following priority actions, in the corresponding sectors, will be financed:

2.    Improving the capacities of the inspectorates for environmental inspection, in order to provide complete application of the relevant laws on environmental protection. The actions will cover:

3.   Increasing the public awareness through educational campaigns, which will be one of the priority actions in this program with the goal to inform the citizens about the damage that is done with using non-ecological means for heating. The campaign will educate the citizens for the alternative, more effective and more ecological and economic heating possibilities, transportation, waste etc.

4.    Reduction of emissions of polluting substances from household warming. As the largest source of pollution, most activities will be implemented by this sector. Bearing in mind that subsidizing is not the most appropriate and efficient way to encourage change, and at the same time it can adversely affect the market activities in this sector (the supply and demand of new technologies and energy fuels for heating), the activities will be directed towards finding models to encourage private companies to offer more suitable packages, and households can more easily opt to change heating technologies. The activities in this sector will achieve the following goals:

5.    Urban greenery - abandoned areas and dust are also a major source of pollution in urban centers. Delayed waste on the same surfaces additionally deteriorate the condition, and their frequent ignition is to dangerous for all surrounding settlements. Therefore, these activities will also have priority in the implementation:

7.    Transport - air pollution from this sector is most directly felt by the citizens, because the emissions are broadcast on the level of daily movement of citizens. Therefore, the activities in this sector will be directed not only towards reducing emissions, but also towards reducing the exposure of citizens even when they are going from one place to another. To this end, the activities will be focused on:

8.    Industry - large industrial companies with A and B integrated licenses, relatively few in number, mainly meet the legal regulations for filtering and air quality reporting. However, regular inspections will be continued and will ensure that they all meet the strict regulations. Legal entities that have an obligation to develop elaborates are a major challenge, as are those who burn waste within their capacity. Therefore, the following activities will be undertaken:

9.    •    Construction - construction expansion and non-compliance with the legal regulations for building and securing construction projects under construction, and the irregular delay of construction waste in recent years significantly contributes to pollution, among others, to the air. Therefore, in this sector, the following activities will be realized: