PM Zaev: Bulgaria's veto is an irresponsible mistake, we remain committed to a solution convinced that it is possible without disputing the Macedonian identity 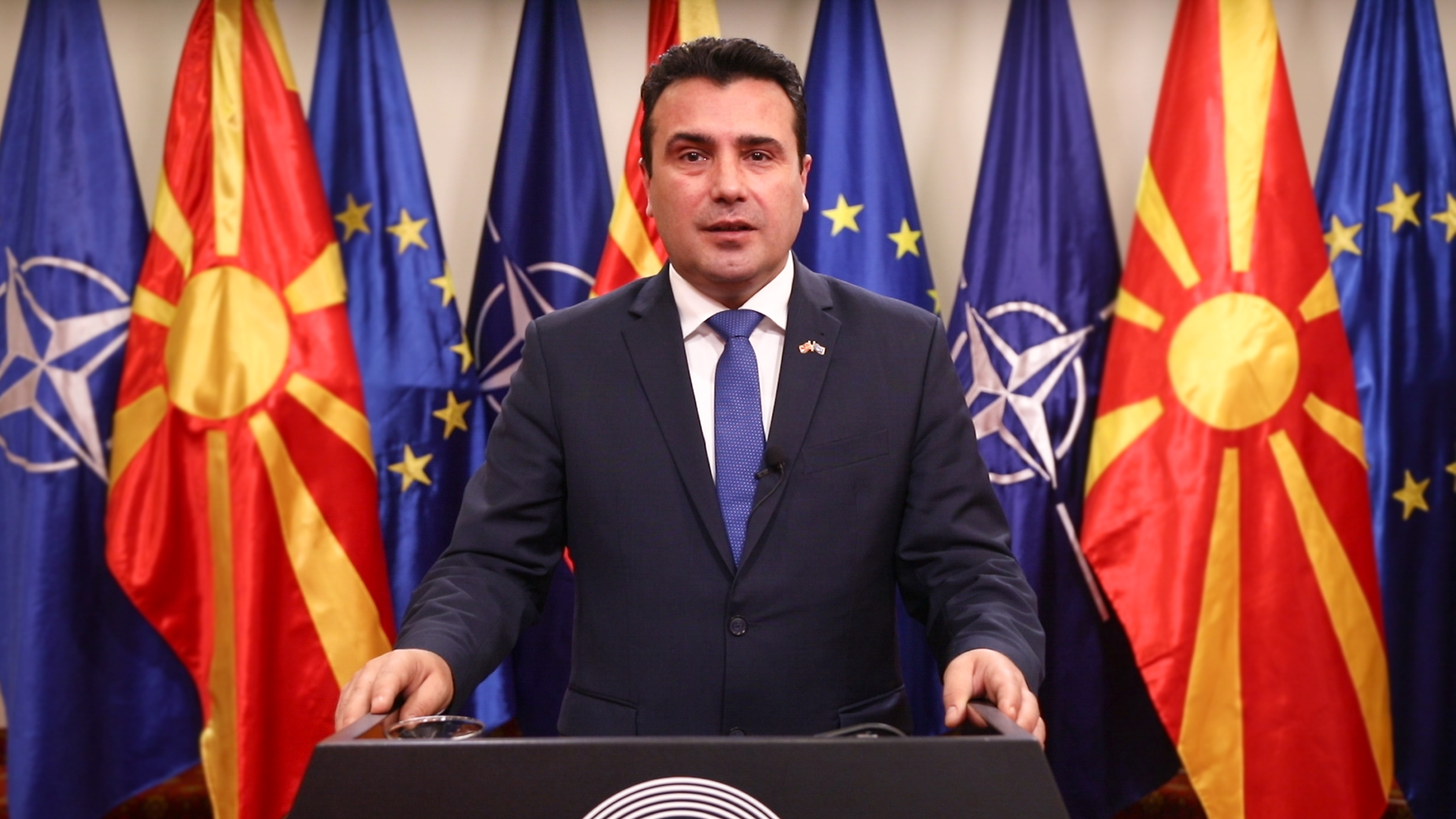 Dear fellow citizens from all ethnic communities in North Macedonia,

It is clear to all of us that so far, the European Union has not reached an agreement to accept the negotiating framework for our country. This irresponsible mistake is bitter news for our entire nation. On this day, all of us share the disappointment of this act.

Bulgaria put a veto, thus violating the agreement on “Good Neighborliness and Friendship”, and thus it stood in the way of our European integration for which the EU institutions and member states, including Bulgaria, have repeatedly confirmed that we fully meet the conditions to proceed to.

That is not the European way. Unfortunately, Bulgaria did not gather the strength to act in a European manner. Bulgaria allowed itself to deliver a gesture that does not show friendship or brotherhood.

Bulgaria's position is completely irrational and offensive to the Macedonians and our entire nation. In the 21st century, it is neither European nor democratic to tell another how to feel or how to self-determine. It is not European to write the history of another nation, to impose an identity on another nation and try to convince them to accept it.

These conditions are not acceptable for North Macedonia, for the Macedonian people, and for all citizens of our country.

We will not allow the anti-fascist identity of our country to be endangered and questioned! The foundations of our statehood are in the anti-fascism of ASNOM, just as the foundations of our identity are in the Macedonian people and the Macedonian language. These are our pillars of the past. These are our pillars for the future.

We refused to negotiate things that should not even be discussed! YES to negotiations with the EU, but NOT at the cost of revising the Macedonian identity. Not under the conditions that Bulgaria is imposing.

We say - YES for Europe and we say NO - for blackmailing the Macedonian people! And NO to blackmailing of our fellow Albanians, Turks, Roma, Serbs, Bosniaks, Vlachs, and everyone else.

The Macedonian state is a country of friendships and coexistence. As an expression of historical memory, the pursuit of justice, and the inviolability of human rights, we have known both to forgive and to apologize in the name of the future. But we have never reached for things that do not belong to us. We are builders. And that is in our identity card as our authentic mark.

This is how the world recognizes us today: We build friendships. We are a shining example of good neighborliness. We have never caused problems and we will never be the problem. We are the bearers of the solutions. That is our winning attitude.

That is why everyone is on our side. Our friends are with us and together with our friends, we will move forward.

We pay tribute and gratitude to all other member states of the European Union. Special thanks and gratitude to the Federal Republic of Germany which in extremely difficult times, at the top of its Presidency of the Union put the EU Budget, the fight against COVID-19 and enlargement, in order to hold the first intergovernmental conference with North Macedonia as start of negotiations for our EU membership.

Unfortunately, the enlargement process as a strategic goal of the EU has been stopped by the Republic of Bulgaria, from the position of an EU member state.

This is an irresponsible and grave geostrategic mistake. And it is good that our international friends and allies are not keeping quiet about this mistake.

Our allies are not silent because they know very well that we have shown friendship and goodwill with Bulgaria. We talked with sincere intentions about how some parts of our common and intertwined history could be interpreted on both sides of the border. Such a multi-perspective understanding of history, which is indisputable, must not, however, encroach on the universal right to identity, language, and culture of self-determination or self-identity.

Our conscience is clear. Throughout the past period, we have been guided by the principles of maximum protection of national interests and the right of the Macedonian people to self-determination which must not be violated. We are putting every effort to open accession negotiations with the EU in 2020, while promoting good neighborly relations based on mutual understanding and respect.

We, therefore, believe that the reasons for not approving the negotiating framework are damaging to the fundamental principles and values of the European Union.

And we hope that the damage caused by this unjustified veto on the region's European integration and European values can be repaired quickly.

Unfortunately, the opposition in our country glorifies the defeat of European values as its victory.

The current and previous leaderships of VMRO-DPMNE for almost 15 years show repulsion and blockades towards our Euro-Atlantic commitment. The closer we got to achieving our NATO membership, the more intense was the spread of lies and hate speech.

(Hristijan) Mickoski and VMRO-DPMNE were the only ones who cheered when North Macedonia did not get a date for the start of negotiations, the only ones who blocked reforms and structural laws important for EU integration. The leader of DPMNE - declared the most positive report of the European Commission as false news and could not force himself to congratulate or applaud in the Parliament on the day when we became the 30th member of NATO.

As we see today, all their lies and slanders have fallen into the water. Their lies that the Macedonian identity was allegedly sold out were shattered. Those who called the Macedonian people hysterical are now sinking into their own hysteria.

That is the dream and desire of the DPMNE leadership. The reality is that the Macedonian people are overcoming this moment with their heads held high against the shameful lies that are a danger to the strategic interests of the country. Even Europe recognized this and called out their lies.

We will not allow prevalence of forces that intend to push the country into hatred towards Europe, uncertainty, conflict, and hatred towards our neighbors. It is our obligation to protect the state and the citizens from deviating from the strategic track one more time. Regardless of the atmosphere that the opposition is trying to impose, this Government will never take a step that would endanger the Macedonian national interests.

We do not intend to put the state in uncertainty. We went through that once. We know how far nationalism had taken us. We will not allow new or old ”Gruevism” like the one after the Bucharest veto in 2008.

We do not need a “nationalistic show” or “hitting in the chest”, which is only for domestic use. It is attractive for home audience, but it is not a solution.

With our moves, we will not help anyone even in Bulgaria, to earn political points on the Macedonian issue.

Nationalism and hate speech are not patriotism.

Patriotism is to achieve all the necessary military and security standards, and political criteria and to become a NATO member country.

In Brussels, at the headquarters of the most powerful military and political alliance in the world, the Macedonian flag is proudly flown and testifies to our national uniqueness. Recognized by all NATO member states, including Bulgaria.

Patriotism is the strong argumentation that the citizens of our country have no reason to worry. The Macedonian people and North Macedonia are already in NATO. It is our victory to be an equal part of the Euro-Atlantic family, side by side with the strongest. Our safety and security will never be compromised. Our path is paved FORWARD!

That is why we demand that the EU fulfill its fundamental obligation and recognize and preserve as an invaluable asset the historical and identity differences of the nations of the European continent. Macedonian identity and language must not be an exception to this principle. We demand in the same way as we care for, develop and cherish our European identity at home, so that the EU respects, cares for, and preserves our Macedonian identity, as a treasure of its diversity.

We remain committed to seeking a solution with neighboring Bulgaria. It will be a solution that guarantees the start of negotiations with the EU, and in no way touches the Macedonian identity.

We continue forward. European integration is not a short-distance race, but a marathon with the ultimate goal of Europeanizing our country. The mandate received from the citizens includes that goal and we will not stop until we achieve it.

We will not allow Bulgaria's veto to stall internal reforms. On the contrary, we will accelerate the pace and increase the advantage we have in the region.

The government of North Macedonia remains on the same strategic track. We have delivered full membership in NATO, we will move the country towards the EU! We will continue with the reforms with the strongest intensity. It is our obligation to implement European standards at home! There is no other way for us, there is no other alternative. There will be no giving up!

In the year ahead, I would like to announce major steps in several key areas.

We will intensify the fight against the COVID-19 pandemic and we will win it. Тhe Covid vaccine is in our reach. We will intensify the gasification of the country, invest in photovoltaic power plants and wind farms. We start with cleaning of the judiciary, and finally will do the most important statistical operation - the census. We take care of every citizen, we are distributing huge economic packages to help the citizens affected by the COVID crisis. We are investing even more in “Corridor 8” and in the infrastructure throughout the country. We build, for today and for tomorrow.

Today, I call on every Macedonian citizen to participate in the reforms. Now we need everyone’s engagement.

These are the moments when we should strongly show our unity. Now, most of all, we need to work together to make our country a better place to live in.

Now with even more faith, commitment, and unity, let us commit to building European standards at home. We will work to get the support of developed European democracies, bilaterally, with each of them in the field in which they are strongest. We will bring the European standards home!

With an indisputably established, protected, and defended Macedonian identity, we are proud and we know that we are Europe, and the Macedonian future is European.

Long live all citizens and all languages spoken in North Macedonia,